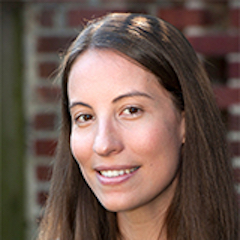 Francesca Musiani (PhD, socio-economics of innovation, MINES ParisTech, 2012), is Associate Research Professor at the French National Center for Scientific Research (CNRS) since 2014. She is Deputy Director of the Center for Internet and Society of CNRS, which she co-founded with Mélanie Dulong de Rosnay in 2019. She is also an associate researcher at the Center for the sociology of innovation (i3/MINES Paris) and a Global Fellow at the Internet Governance Lab, American University in Washington, DC.

Since 2006, Francesca’s research work focuses on Internet governance, in an interdisciplinary perspective merging information and communication sciences, science and technology studies (STS) and international law. Her most recent research explores, or has explored, the development and use of encryption technologies in secure messaging (H2020 European project NEXTLEAP, 2016-2018), “digital resistances” to censorship and surveillance in the Russian Internet (ANR project  ResisTIC, 2018-2021), and the governance of Web archives (ANR project Web90, 2014-2017 and CNRS Attentats-Recherche project ASAP, 2016). Francesca’s theoretical work explores STS approaches to Internet governance, with particular attention paid to socio-technical controversies and to governance “by architecture” and “by infrastructure”.

Francesca is the author of Qu’est-ce qu’une archive du Web ? (What is a Web Archive?, OpenEdition Press, 2019, with C. Paloque-Bergès, V. Schafer and B. Thierry, recipient of the OpenEdition Books Select distinction), Internet et vie privée (Privacy and the Internet, Uppr Editions, 2016), Nains sans géants. Architecture décentralisée et services Internet (Dwarfs Without Giants: Decentralized Architecture and Internet Services, Presses des Mines, 2013 [2015], recipient of the French Privacy and Data Protection Commission’s Prix Informatique et Libertés 2013), and Cyberhandshakes(EuroEditions, 2009, recipient of a publication scholarship of the European Foundation for the Information Society). Francesca has co-edited the volumes The Turn to Infrastructure in Internet Governance (Palgrave-Macmillan, 2016, with D. Cogburn, L. DeNardis and N. Levinson) and Abécédaire des architectures distribuées (Primer of Distributed Architectures, Presses des Mines, 2015, with C. Méadel), and several special issues of academic journals. She is academic editor for the Internet Policy Review, after serving as one of its pioneer authors, and an editorial board member for RESET, both “green” open access journals.

Francesca was the Yahoo! Fellow in Residence at Georgetown University and an affiliate at the Berkman Center for Internet and Society at Harvard University in 2012-2013; during her graduate studies, she has spent time at the University of California at Santa Barbara, and at the United Nations-mandated University for Peace in Costa Rica. Francesca is a member of the CSA lab, and vice-president for research of the Internet Society France, after having served in the Commission de réflexion sur le droit et les libertés à l’âge du numérique of the French Parliament in 2014-2015. Since 2017, she co-chairs the Communication Policy and Technology section of IAMCR, after having led its emerging scholars network (2012-2016).

Francesca teaches the sociology of controversies to students of science communication at the Centre de recherches interdisciplinaires (CRI), and to engineering students at the École Mohammed VI Polytechnique-EMINES in Morocco.