The CSI research team welcomes Vincent-Arnaud Chappe, recruited as a researcher to the CNRS. His current research concerns the statistical equipment of the nondiscrimination and equality policies within firms.

Vincent-Arnaud Chappe is the co-chairman of the RT13 thematic network “Sociology of law and justice” of the French Association of Sociology. He is a member of the editorial committee of the journal Terrains et Travaux.

Your research focuses on the quantification of inequalities and diversity in firms. What is your perspective on the issue and what are your research interests?

My initial work in political sociology of law was about the legal recourse against discriminations at work: how law frames discrimination, what law does to it, how it defines it, and the resource law constitutes for individuals who experience discrimination. In short, I was interested in the tensions between the requirements of the legal grammar, the victims’ reparation expectations, and the political horizon related to the fight against discrimination. I worked on these issues in the particular context of judicial litigation[i], paying particular attention to the tools and the technologies used to provide evidences when cases are brought before the court of justice.

But law does not act exclusively in a context of legal disputes. I have focused my interests on what has been coined the managerialisation of law, that is, in the field of discrimination law, the way firms translate legal rules and integrate them into the routine of management activities and into their organization. I continue to investigate the related issue of statistics as a tool of proof: how tools and indicators of equality between employees are integrated into firms and are used in management, human resources administration or trade union action related activities.

Furthermore, I have become interested in another issue related to the action of statistical tools, that of activism through numbers – or statactivism. Beyond the classical postulate according to which statistics would be a tool of power, a series of recent works develop the idea that they can become an activism tool.

I have built my current research program on these theoretical and empirical bases with the idea of analyzing more systematically the production of these figures and indicators of equality and diversity in firms, as well as their effects.

How do you approach these issues?

The idea is to systematize the reasoning based on the comparison between four domains: the domain of gender inequalities, where the use of figures is extremely institutionalized; the domains of trade unions and of disability, where it isn’t institutionalized but where there is on the part of the firms a growing incentive or commitment to count; and the ethno-racial domain where, on the contrary, counting is in some way taboo or illegitimate.

I plan to study the emergence of these tools over the last thirty years from a chronological or genealogical point of view: the more or less important implementation and institutionalization of tools in these four domains, and the crossings between these domains. The issue of gender inequalities is central 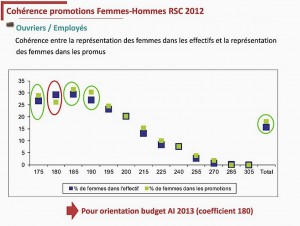 because tools (the reports on the comparative situations of men and women[ii], in particular) have been implemented since 1983. A second part of the project includes company monographs: the tools that have been implemented, what the controversies about the definition of indicators and figures, as well as the actual use of figures, have been.

The two main hypotheses, without being inconsistent, point in different directions. According to the first one, in order to be effective a policy fighting against discrimination and for equality has to be based on quantitative elements allowing to think of equality and disparity as a systemic phenomenon, and to get off the case-by-case approach which often characterizes legal action. For instance, these elements enable to demonstrate, in such or such firm, the existence of discrimination against women at the organizational level. The second hypothesis is that, concomitantly, this quantitative prism has binding effects: it may technicize the discussions and exclude a whole set of disparities and power relations which are not directly – or less easily – translatable into the language of figures. Selection effects are obviously at work.

The attention given to remunerations is an example of the concrete effects that this quantitative prism can generate. The largest wage gaps concern mostly the middle and senior levels of management; it comes down to the point that the gender equality policy targets the women with the highest income; they certainly are subject to discriminations, but compared to women in general they are in an advantageous position. 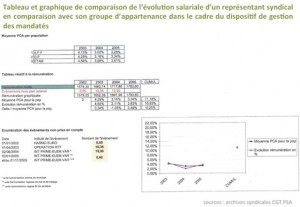 I was able to observe another example of the effects of technicization: in order to calculate the gender-related wage disparities, the management of a firm decided to use a multilinear regression method that ultimately almost nobody in the firm understands, neither labor unions nor even the management; this choice produces very interesting depoliticization effects – in any case the discussion has shifted towards very technical issues about statistical coefficients or statistical tests. And at the same time, in spite of this technical shift, some actors have managed to find margins for negotiation and action in order to obtain a substantial reparation, proof that one should not have too determinist and unambiguous a reading: these tools also allow the actors to move forward collectively, since they offer them a common calculation space where they are able to discuss.

What interests me in these situations is the fact that power relations, very technical statistical analysis arguments, and more political arguments become entangled, since they are based on different reference frames (more sociological, economical, managerial or legal) for reading and interpreting the figures.

[ii] Firms with over 50 employees have the obligation to produce each year a quantified situation report comparing the situations of men and women within the firm (recruitment, contracts, training, wage, etc.).

Chart #1 : Exemple taken from a rapport comparing the situations of men and women presented at a large company’s central work council.